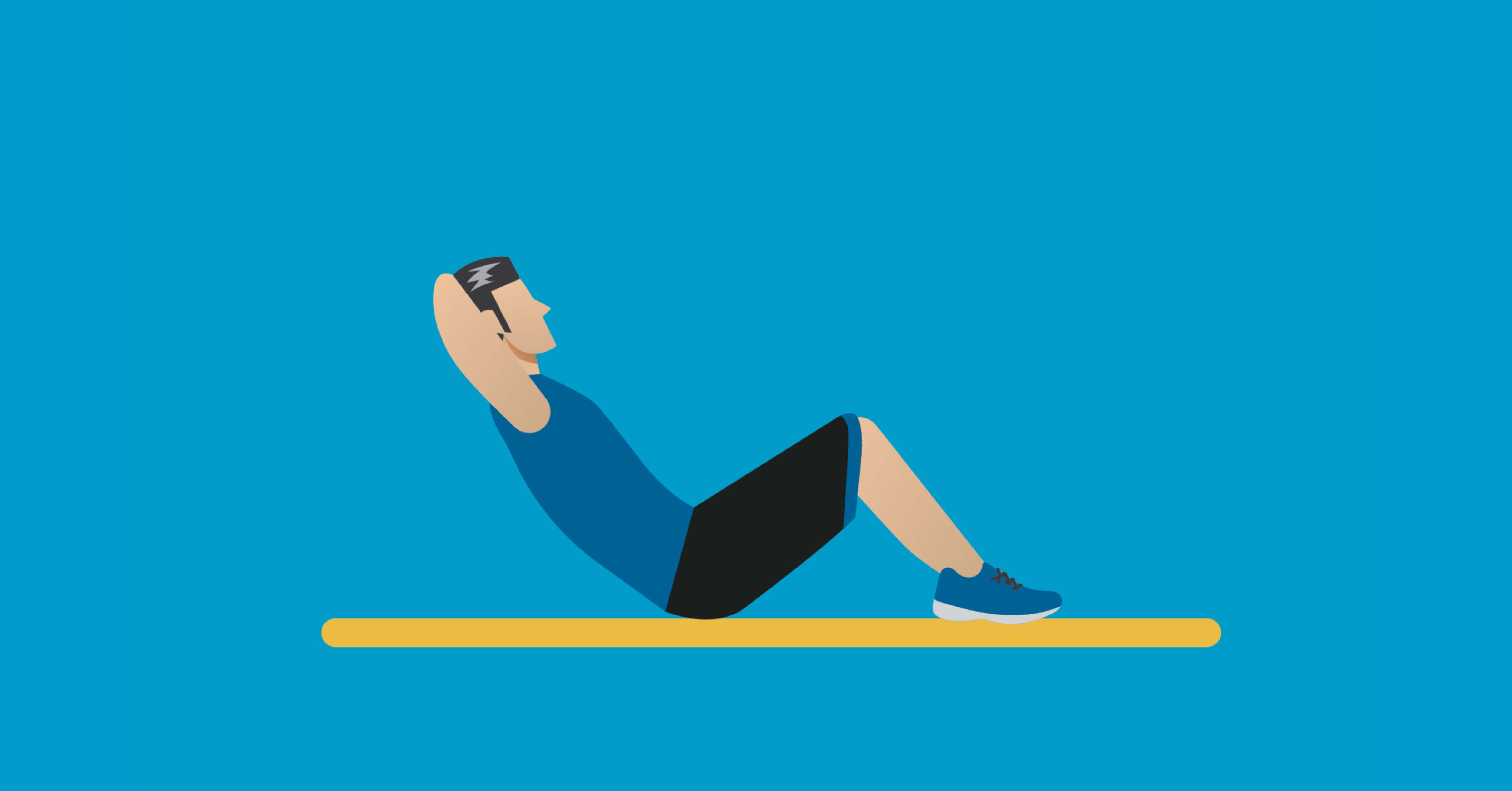 When I was doing my sit-ups yesterday, I started thinking about how networking is a lot like exercise. We have have certain skills that we use―think of them as “muscles”―and when we don’t use them, they can atrophy.

Muscle atrophy is when the muscles of the body deteriorate or waste away.

Last year, I was very hit and miss (lazy) with my sit-ups. My stomach muscles atrophy through not using them enough and now my gut is flabby. Not happy. I’m determined to make my stomach muscles strong again and get my gut back in shape. That means being disciplined about doing my sit-ups consistently every morning―just like I used to before I got lazy.

Just as the muscles of the body can atrophy, so too can our “networking muscles”. And that’s a problem you don’t want to have.

Networking―building a referral network―has always been and will always be the highest ROI thing you can do to increase your client base and grow your business. Building your referral network will do more to bring the money in than advertisements, mailings, cold calling and online marketing COMBINED!

Now, let’s just get this out of the way.

No marketing approach works if you don’t do good work, if your products and services aren’t up to the mark. So you have to deliver the goods. But assuming you meet that threshold test, then there is no marketing approach that has a higher ROI than networking.

This is not a debatable proposition. When it comes to generating new business, networking is not optional, it’s mandatory. Networking works. It’s what brings you the very best clients.

Let’s face facts. The people that are generally the most desirable clients have relationships with other people. When they need a financial adviser, a lawyer, a website designer or whatever, they ask their friends, their business contacts, their family members. That frequently leads to a recommendation or a referral. When that person is you, your business thrives. When that person is your competition, their business thrives.

So networking works. And it should be your number one business development marketing approach. Your buyers (clients) would rather meet you through a referral. The endorsement and testimony of others makes them feel much more comfortable opening their door to you and giving you their business.

Yep, networking really is like exercise. Few people actually love it, but to grow a business and to keep it growing, it’s something you should do. You need to incorporate networking into your daily routine every week. But if you let it slip, if it goes onto backburner, if you get lazy with it for any length of time your business will suffer.

Networking―building a professional network―is scary for a lot of us. It requires talking to people we don’t know and building those relationships. That pushes our fear button. It makes us feel uncomfortable. It makes us feel vulnerable. That’s why so many of us default to social media, e-mail, texting and other “safer” marketing approaches as a way of avoiding having to leave the office or pick up the phone and actually speak to people. But the facts don’t change. Networking in-person has the highest ROI of any marketing activity that we can do. Period!

If you have the right relationships in place then
business will flow from and via your network with regularity,
no matter what the economy is doing.

So, if you decide networking is to be your number one approach then you’ve got to get over that hump, that fear, that avoidance and get on with it. That involves showing up at networking events and talking to some people you don’t know. It also means becoming an active member in some kind of networking or community group. It also means picking up the phone and calling people you haven’t spoken to in a while. And it also means going on lunch and coffee dates. And that means plucking up your courage to have those all-important one-on-one conversations. It’s not always easy, but you have to do it.

And once you do, almost inevitably, good things happen that help you get beyond that fear, that discomfort, that reluctance. You get things moving. And when that happens, you start to have some momentum. You start to see developments. The next thing you know the person you met at the networking event calls you up with an amazing business opportunity. Or the the person at coffee referred business to you. Or the person you called to touch base calls back later with a nice piece of work for you.

I see it over and over again. Business owners and professionals of all stripes say, “I’m going to do it” who then actually do something. They take action. They go to that networking event. They join that networking group. They do that lunch, that coffee, that phone call or whatever it is. And they see wins. They have small victories. They feel like there’s something happening. Things are moving forward. And the next thing you know, you’ve got momentum. That’s awesome!

That’s what you want to happen. And those small wins, those little victories feed us. They give us that “YES!” feeling. They propel us to do the next networking event, the next lunch, the next coffee, the next phone call or whatever it may be. They give us the “mojo” that we need to keep pushing forward with our networking. Fantastic!

But. And this is a BIG but. It’s easy to slip out of that positive state. It’s easy to lose the momentum. And when that happens, when we find a reason (excuse) to stop we begin to deteriorate. We lose our mojo. And, in my experience, networking postponed is networking not done, and the longer that you avoid doing it, the more “rusty” your networking skills become. Your networking muscles begin to atrophy. That’s a problem―a big one. You cannot let that happen. Because when that starts to happen, the fear comes back. The reluctance to make those connections and do those calls comes back.

Again, it’s very easy to slip out of that positive state, that moving forward state and start going back to where we were before we got that forward momentum. And I want to give you a heads up about this because if you let that momentum slip away the fear will come back.

You’ve got to recognise the signs. And the most common sign is that we get busy. We start to feel like we’ve got plenty of work coming in and there’s lots to do and so we put off going to the networking event… we skip the next group meeting… we hold off making those calls. And the next thing you know it’s been a day or two, then a week or two, then a month or two since we’ve done any networking activity as time slips away.

So don’t tell yourself that you’re too busy to network or this is not a good time to network because of this or that reason. You’ve got to keep the momentum going so you don’t get sucked back into that state of fear and avoidance. You don’t want to be in a position where you have to get going all over again.

And there’s an even bigger problem here. Slipping out of your networking routine perpetuates the feast or famine cycle. It’s what happens when you win one contract, and another, then another, until all your working hours are consumed with client projects. Then, seemingly inexplicably, the work dries up. You finish your current crop of projects and go through a very stressful period of low cash flow. You may think this is the natural ebb and flow of business, but there is a direct cause and effect going on. When you stop networking you stop feeding the pipeline with opportunities, and then down the track, business dries up as a result. Don’t let that happen.

Okay, sometimes you are in fact legitimately too busy. So look for little ways to keep moving forward. Little things you can slip in right between all the other stuff you have to do. For example, send a quick email to your contacts―one at a time―with a link to an article you just read or a video you liked that they would find interesting. Pick up the phone and quickly check in with your best contacts. Say you’re swamped with work right now and when you come up for air you’ll invite them to coffee. Set yourself a reminder to make sure it happens. Shooting off a quick personal email or making a short call to your contacts helps to maintain the momentum (and tells people that you’re still alive) when you really are too busy to leave the office.

Do everything in your power to keep up with your networking activity. Even when you’re busy you want to maintain the momentum because starting from scratch when the fear and reluctance comes back makes it so much harder to get going again.

Footnote: Fortunately, I learned to network, make genuine connections and build relationships with people long ago and I can attribute nearly every good thing that ever happened to me in business (and in life) to those relationships. I have never gone to a networking event and not met someone of significance or bumped into someone that I knew and strengthened the relationship. The networking and community groups I belong to have been a great place for building my referral network and making great friendships. The people I give a call to that I haven’t spoken to in a while are genuinely pleased to get my call. And almost always, something good comes from meeting my contacts for coffee or a bite to eat.

Yep, networking works. No doubt about it!

Need to be better at networking? You may wish to contemplate getting my e-book, Making The Most of Your Business Networking Conversations

Now if you’ll excuse me, I’ve got some sit-ups to do.

This site uses Akismet to reduce spam. Learn how your comment data is processed.

Are you out there networking and not generating enough business?

If you want better (more profitable) results from your networking conversations, learn to ask better questions.
Get Your FREE copy of the eBook
"15 Questions For Your Networking Success"
This is an 18-page compilation of my favorite questions that I personally use when I’m meeting people at a networking event.
It's Powerful Stuff!

Subscribe to the blog & get your FREE eBook
"15 Questions For Your Networking Success"
This is an 18-page compilation of my favorite questions that I personally use when I’m meeting people at a networking event.
It's Powerful Stuff!

Get Your FREE copy of the eBook
"15 Questions For Your Networking Success"
This is an 18-page compilation of my favorite questions that I personally use when I’m meeting people at a networking event.
It's Powerful Stuff!